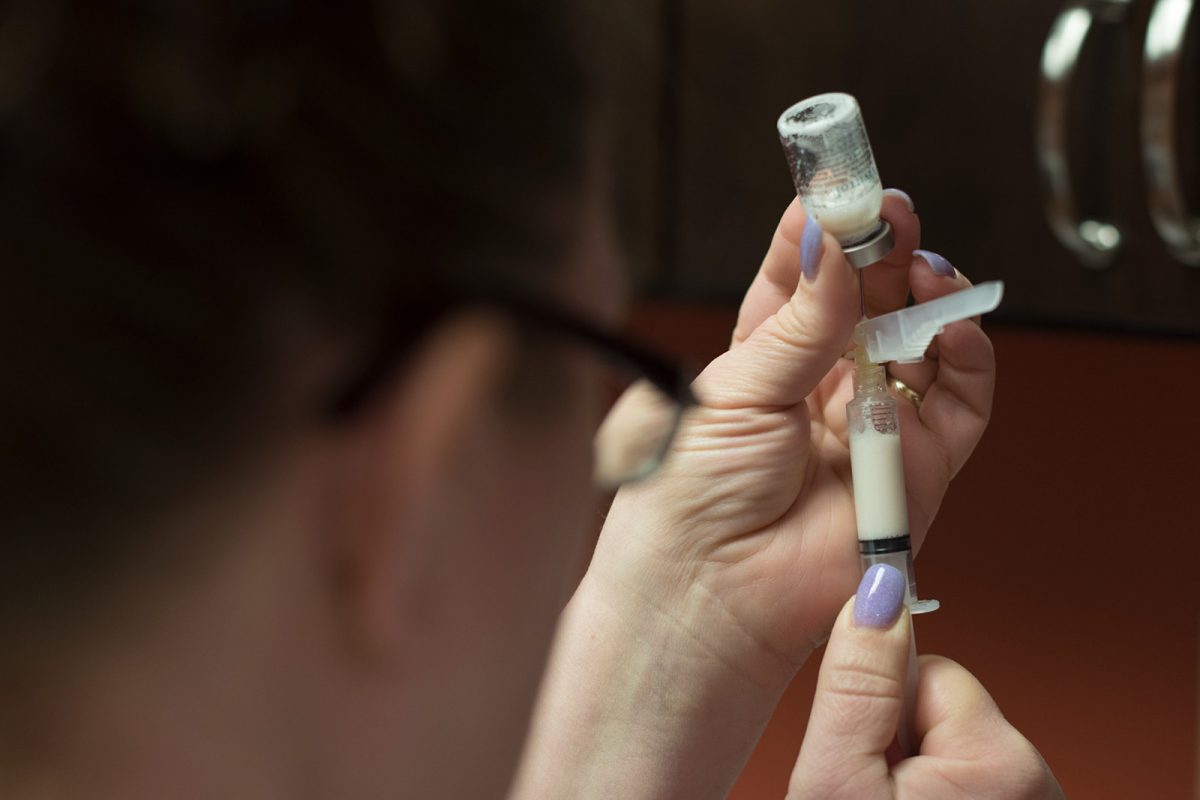 The opioid epidemic raging in our country, state, towns and cities is nightly news—but you might not know how important health information technology (hIT) is to supporting our public and private agencies in this fight. In this context, Hixny has a critical role to play.

The Cost of Devastation

The scale of the crisis has been well documented. Since 1999, deaths from prescription opioids have more than quadrupled, reported the Centers for Disease Control and Prevention (CDC). The number of prescription opioids sold in the U.S. has increased by a similar amount. It’s strange, though, that the aggregate amount of pain reported in the U.S. has remained flat during the same time. Americans are not hurting more; they’re taking more prescription drugs to treat the same amount of pain.

“Our treatment providers tell us that opioid use is surpassing alcohol use as the presenting issue for people entering treatment,” observed Katherine Alonge-Coons, Commissioner of the Rensselaer County Department of Mental Health. “Alcohol has been number one in that ranking forever. This is a significant shift.”

As if that weren’t enough of a concern, there appears to be a link between prescription opioids and their illegal cousin, heroin. According to a study quoted by the National Institute on Drug Abuse, nearly 80 percent of heroin users reported using prescription opioids—their own or from others—before moving on to heroin.

Today the impact extends well beyond addicts and their loved ones, affecting the U.S. economy as a whole. The CDC estimates the total cost of the epidemic at $78.5 billion per year, including healthcare costs, criminal justice expenses and workers’ lost productivity. A 2017 Goldman Sachs report ties the use of opioids to a decline in workforce participation, indicating that many opioid users of prime working age are unable or unwilling to find work.

The epidemic has not spared New York. A report from Matrix Global Advisors showed that the state’s total healthcare cost of opioid abuse is $1.25 billion, or $64 for every resident. That’s the third-highest in the nation. 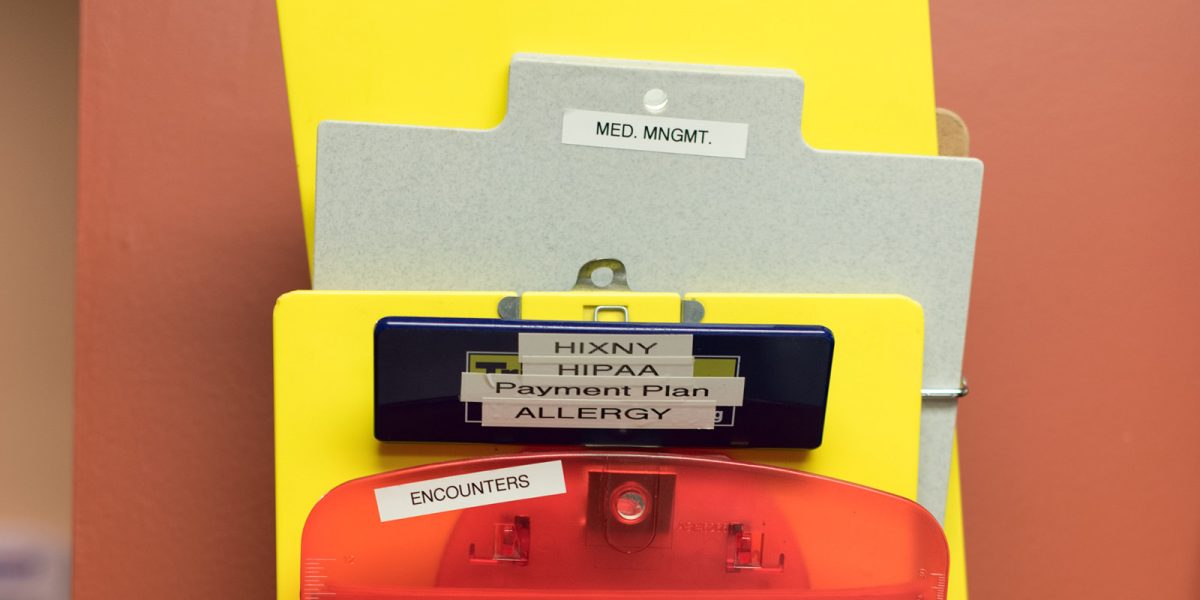 Hixny has become an integral and seamless process in the patient experience at First Care. The clipboards above show the various precautions First Care takes in monitoring the patient through recovery.

A 2015 report from the New York State Department of Health (NYSDOH) to the governor and legislature included a wealth of sobering statistics about the upstate region. Among New York counties, two in the Hixny service area ranked high in opioid-related inpatient hospital admissions: St. Lawrence County at second and Greene County at fourth. Six Hixny counties had opioid-related hospitalization rates above 20.2 per 100,000.

“This is a true epidemic,” said Dr. Michael S. Fuhrman. “The numbers are staggering. It’s wreaking havoc not just on the lives of addicts but also on their families. Overdoses are only part of the problem.”

Fuhrman knows that from experience. He operates urgent care center First Care and his own family practice in Delmar, as well as seeing patients at Conifer Park, a chemical dependency treatment center in Glenville. He was also among the first doctors in New York to complete training in the prescription of buprenorphine, a drug used in treating opioid addiction.

Besides the number of opioid cases he sees, Fuhrman worries about current awareness of the crisis among his colleagues. “I would say only 25 percent of doctors are fully aware of the scale of the epidemic upstate,” he said. “We certainly need more awareness, we need better communication and we need more funding so that more doctors can be trained in prescribing anti-addiction medications.”

More awareness is a major piece of the opioid strategic plan that Tara Thomas, CDPHP Managed Care Pharmacist and Lead for State Programs, is bringing to her company. The four-pronged plan addresses nearly every aspect of opioid prescription, from provider education and formulary changes to identifying opioid overuse and building community coalitions. 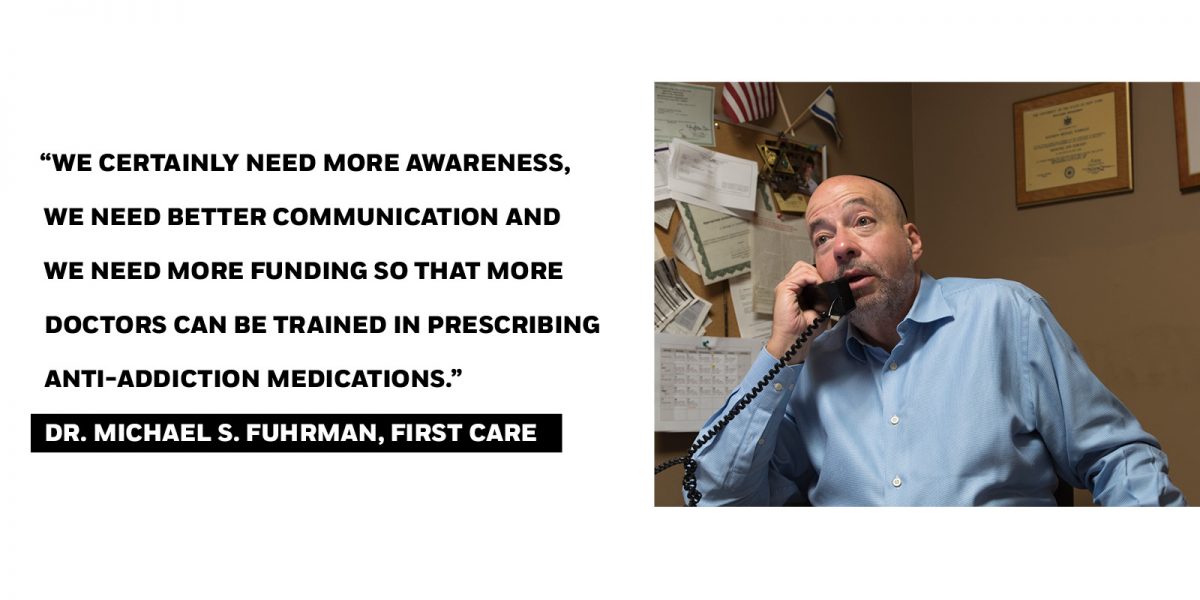 “The biggest impact of this plan, I think, will be the education efforts—both for providers and for members,” Thomas said. “As I look at the prescribing data, I see some very concerning trends, such as opioid prescription renewals after the patient has overdosed. Our Physician Engagement Group will sit down with providers across the region, communicate our strategic plan and ensure they’re up to date with best practices.”

Thomas appreciates Hixny’s alerts and notifications and would love to see more applied to opioid use. “It would be fantastic if I could pull up a member’s record and see some sort of flag that they had visited the emergency department (ED) for an overdose,” she said. “Even more than that, I want to find a way to identify overdoses closer to real-time—for CDPHP to receive alerts so we can mobilize and refer the patient to case management.”

CDPHP is hardly alone in its activities. Across the healthcare community led by government at several levels—organizations have taken steps to combat the epidemic. New York State alone has launched a broad array of measures such as making free naloxone (a powerful antidote to overdoses) widely available, training more than 83,000 “community laypersons” to recognize and respond to overdoses, conducting outreach in schools and upgrading the schedules of certain opioids.

At the same time, local initiatives have cropped up in Hixny’s region. Rensselaer County, for instance, has developed what Coons calls a “very strong emphasis on the continuum of care.” That includes a new ambulatory detox center, as well as counseling and medication programs for inmates. The county also hired a peer engagement specialist to help people in recovery successfully navigate critical transition points, such as entering inpatient rehab or being admitted to an emergency department (ED) after an overdose.

Hixny’s focus on population health can make it an important player in the continuum of care, well beyond Rensselaer County, Coons explained. “Right now, many of the databases that inform us on the opioid crisis cover a certain segment of the population: Medicaid recipients, for example, or people admitted to treatment programs. Only Hixny can give us the breadth and depth of data that community agencies need to plan for crisis like these.”

“In addition, Hixny data could be very useful in identifying hotspots in the community for opioid abuse,” she said. “If we could drill down, for instance, by zip code, we could design interventions targeted to the unique conditions in a particular area.” 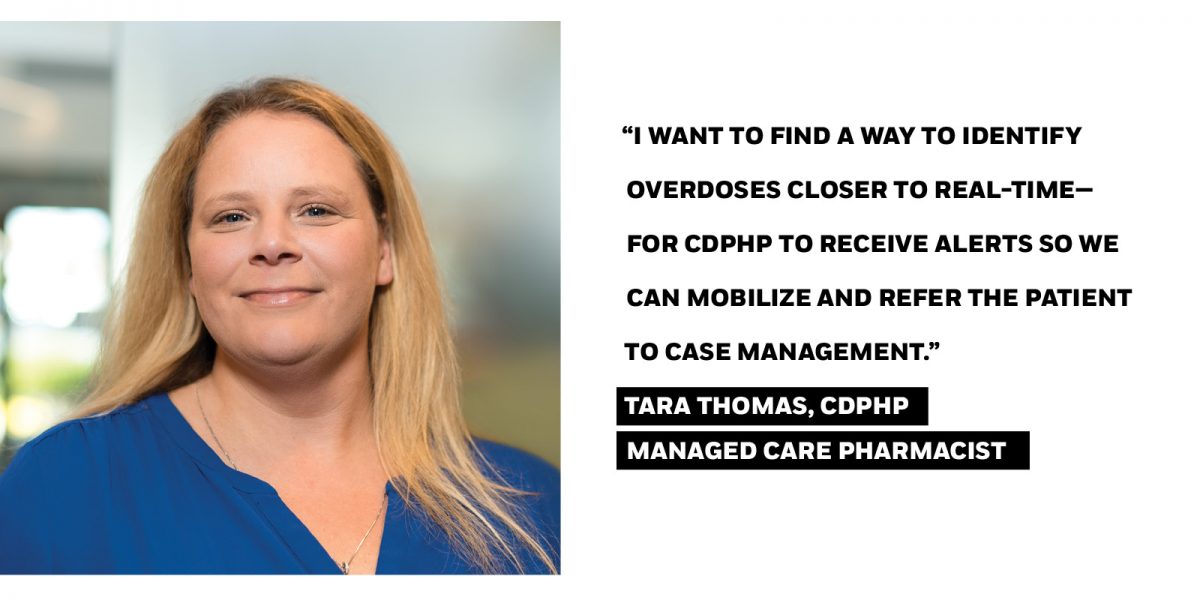 Albany has taken a similar continuum approach. A broad coalition of organizations has launched the city’s Law Enforcement Assisted Diversion (LEAD) program, which focuses on people who encounter the criminal justice system because of addiction, mental illness or poverty. Under LEAD, police officers use their discretion to divert these individuals away from the typical cycle of arrest, detention, prosecution and incarceration to a community-based, harm-reduction intervention.

“In my eyes, LEAD is a healthcare and social service program, even though law enforcement is the entry point,” Brown said. “It can have a great impact on cost savings, not only in criminal justice, but in preventable hospitalizations.”

Another LEAD program is beginning in Essex County, where a cross-section of agencies—the public health department, treatment centers and behavioral health agencies, to name a few—founded the Essex County Heroin and Opioid Prevention Coalition (ECHO). In just 18 months, led by Outreach Coordinator Brooke Clark, ECHO has forged a model of interagency collaboration and communication around four key areas: prevention, intervention, treatment and recovery.

The impact of such a collaboration quickly became clear. “In the past, the police department has run prescription takeback days. They’ve typically received 10 to 25 ‘deposits,’” said Linda Beers, Co-Chair of ECHO and Director of Essex County Public Health. “This year, though, everyone in the coalition got behind the program, everyone promoted it and we collected 92 deposits. That’s what breaking down silos can do.”

Beers echoes Coons about Hixny and population health. “We know anecdotally that primary care doctors in the North Country have done a great job managing and limiting the duration of opioid prescriptions,” she explained. “But we know next to nothing about how specialists, dentists or other providers are addressing the issue. What if Hixny mined its data to see whether, for instance, one specialty prescribed more oxycodone in Essex County than anyone else? Then we could
re-focus our attention on that area of greatest need. Hixny has the data to uncover these trends.”

Health IT Pitches In

Away from the front lines, federal and state governments also see prime opportunities to combat the epidemic by capitalizing on the shift to electronic records. HealthIT.gov notes, for instance, the enhanced security features of e-prescriptions, including prescriber authentication and secure transmission. New York State now requires practitioners to use e-prescriptions for controlled and most non-controlled substances.

Another statewide initiative is designed to prevent “doctor shopping,” in which opioid abusers try to secure multiple prescriptions from different doctors within a short time frame. With paper records, it would be impossible to stop doctor shoppers, since their prescription histories would be scattered across many providers.

This makes another e-system—prescription drug monitoring programs (PDMPs)—particularly important. These electronic databases provide patient histories of controlled-substance use directly to providers and prescribers. New York State has taken an early adopter role by creating its own PDMP, called I-STOP, and requiring providers to check it before prescribing opioids.

When used in conjunction with these health IT tools, Hixny provides a more complete history on a patient seeking opioid prescriptions.

“Doctors should check I-STOP and then use Hixny to delve further into the patient’s history,” Fuhrman said. “We could see what else patients have done to manage pain, what conditions they’ve had, who else they’ve seen for the problem, among other things.” With the full picture in hand, providers could make more informed decisions about opioid prescriptions—taking special care with those who may be predisposed toward addiction and ensuring the use of opioids only for short-term therapy.

The thread that connects all of these initiatives is a new approach to communications and partnerships across traditional barriers. That kind of boundary-breaking connection is the key to combating the opioid crisis—and it’s central to Hixny.